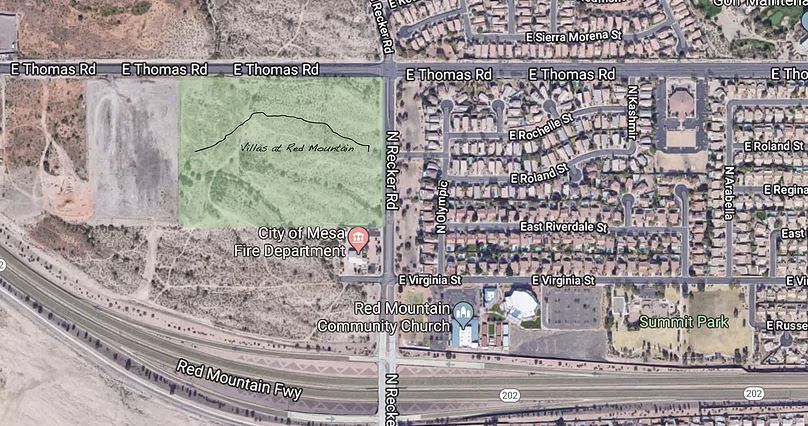 I’ve held off making this post until I’ve had some information and facts on the issue. It’s time to spread the word and take some action.

The City of Mesa stands ready to approve or reject a plan to develop single-family homes on the southwest corner of Thomas and Recker Roads. The developer, Desert Troon and Wendell Beck, have already received approval from the Mesa Planning and Zoning Board to rezone the land from multi-use to residential but the Mayor and Council must sign off on the P&Z Board’s final recommendation. That meeting is scheduled for Monday, March 5th.

Typically, when the Council hears a planning and zoning item, the council defers to the councilperson who represents the area of the proposed item. In this case, that would be Councilman David Luna.

Last week (Tuesday, February 13), I reached out to Councilman Luna’s office requesting his position on the plan to develop the Thomas and Recker parcel. I asked for his thoughts and how he intends to vote on P&Z’s recommendation. One week later, I have not heard back from Councilman Luna.

I also asked my contact at the Red Mountain Social Club if a recent visit by Councilman Luna revealed anything about his position on the property. At their meeting on February 8th, Luna said that he opposed the rezoning and prefers to see the land kept multi-use with light commercial and restaurants on the property.

During the Planning and Zoning meeting, City of Mesa’s Economic Development Director, William Jabjiniak, pushed for the area to become class A offices and warehouses. He even disclosed that he is pushing for the construction of warehousing of up to 150,000 square feet so that Mesa can attract more industry to northeast Mesa. Jabjiniak believes the Planning and Zoning Board erred in its decision to rezone the parcel to single-family residential.

I also spoke with a neighbor in Red Mountain Ranch that also confirmed Luna’s position on the rezoning and what should be built on the land.

Those opposed to rezoning the land for homes fall into two camps. A small handful of Red Mountain Ranch residents want the land to remain vacant. the City of Mesa wants to build more offices, warehouses and light industrial on the land. Multi-use also means that high-density apartments could also be built on the land. You don’t have to look far to see what happened on the southwest area of Las Sendas where townhomes, a long-term care facility and a charter school are being built.

Because the owner of the property has sat patiently for twelve years, it’s highly doubtful that the land will remain vacant. Something will be built.

I’ve spoken with the owner and confirmed that other developers have approached him about building apartments. He told me that his goal is to build single-family homes in a secure gated community. Those plans are solid and even have a name – The Villas at Red Mountain.

I recognize the fact that the land will be developed and there are really only two choices – multi-use or residential.

If David Luna gets his way, the southwest corner of Thomas and Recker Roads will be turned into offices, restaurants, light industrial and maybe even apartments. Like many of my neighbors in Red Mountain Ranch, I believe this is the wrong place to build out more office space and warehouses. That area remains south of the 202 as part of the Longbow plan. Incidentally, during the P&Z meeting, Jabjiniak revealed that the large concrete building across from Boeing on Higley has no tenants or prospective tenants.

Please call, email, write or visit Councilman David Luna’s office and ask him to approve the plan to rezone the land for single-family residential. Tell Councilman Luna that you don’t want to see or hear tractor trailers and fast food squawk boxes across the street at all hours. This area is right for only one type of development and that’s a quiet high-quality community.

I’d also ask you to contact Mayor John Giles and ask him to support our quiet residential community of Red Mountain Ranch.

Again, the Mayor and Council meet on Monday, March 5th at 5:45 to hear the rezoning case. The Planning and Zoning Board made the right decision when they approved request to rezone.

Please call Councilman Luna and Mayor Giles and ask them to support the plan to rezone. Then plan on attending the council meeting at 57 E 1st Street (map) at 5:45 on Monday, March 5th.

You have less than two weeks to make your voice heard!

For information about the plans for The Villas at Red Mountain, visit their website at VillasAtRedMountain.com.