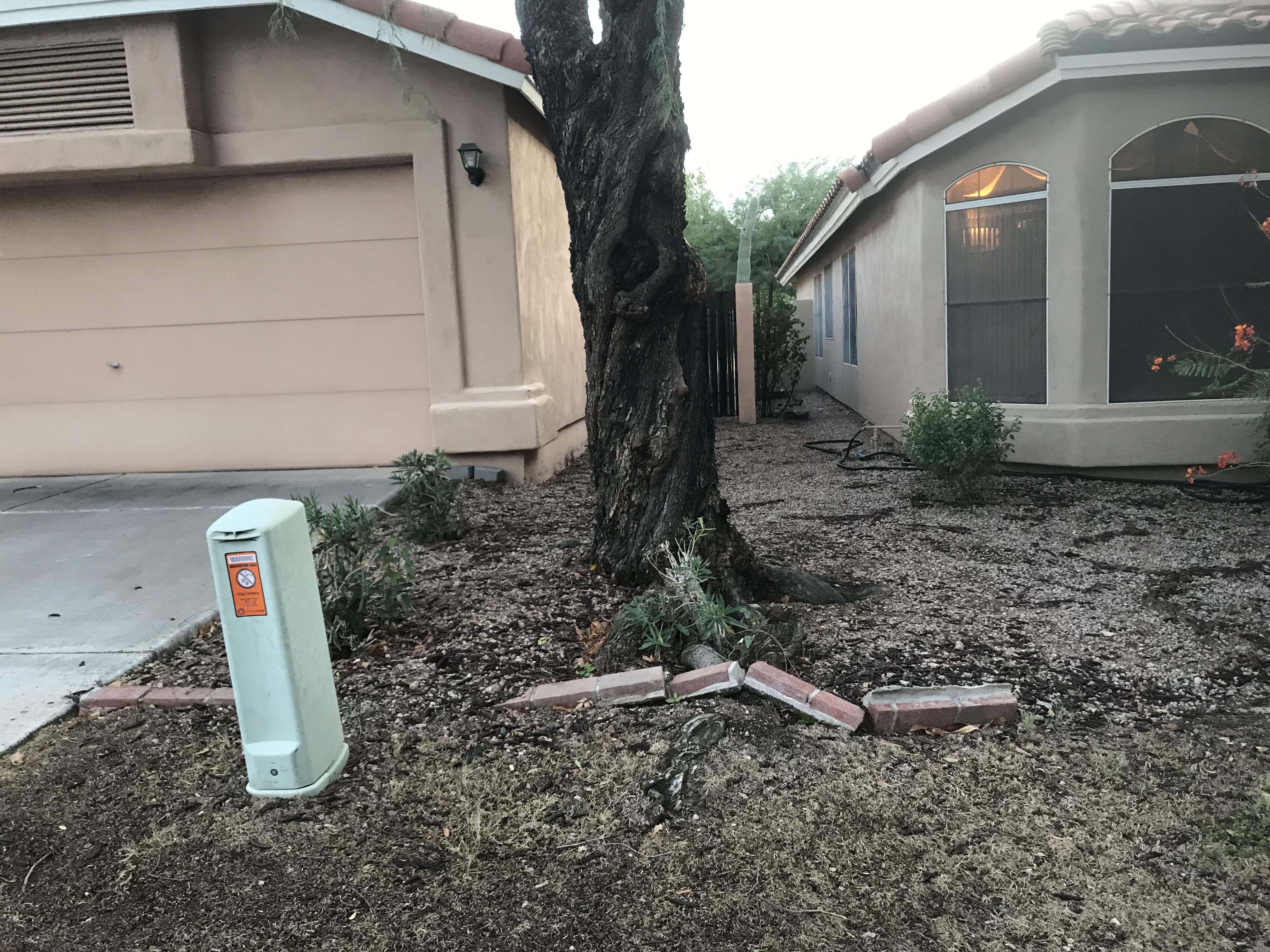 This post is my opinion solely. It is NOT the official position or policy of the Red Mountain Ranch Owners Association, its Board of Directors or its management company.

Every July and August, I begin to hear complaints from homeowners who live in the Villages of Red Mountain Ranch about the condition of landscaping. The typical complaint is that the grass is dead, irrigation is watering dirt and front yards generally look bad. This is nothing new and by mid-October when the winter Rye is sprouting, the complaints cease.

There are several factors why our yards look so stressed and unattractive and I’ll attempt to explain using my knowledge, experience and research.

TIME OF YEAR
It’s summer. The excessive heat swings stress our landscape plants and this makes our shrubs wilt and dry out. During the hottest part of the day, it is not wise to water a stressed plant. Shade is what most shrubs need. That’s why a stressed plant returns to normal after direct sun is no longer hitting it. Shrubs growing in the shade of trees during the hottest time of the day will do much better than those open to full sun all day long. Bermuda grass (turf) however needs full sun and as much of it as possible all day long in order to thrive.

PLANT COMPETITION
When the Villages were built, the developer placed two trees in each front yard. One tree was typically planted in the granite and one in the turf area. Trees in the turf area usually shade Bermuda grass. Bermuda grass needs full sun in order to green up and thrive. You will note that winter Rye grows well without sun or shade (which is why most lawns look great during our cooler season). The other problem with trees planted in turf is that they are both competing for nutrients. Turf will struggle for those nutrients especially close to root systems.

SOIL CONDITION
The Villages (and the rest of Red Mountain Ranch) was built on the western slope of a small mountain range. We are not located in the basin of the valley where you will find more clay and sediment in the soil. Dig down a few inches in most places of your yard and you will probably hit caliche – a very hard sedimentary, calcium carbonate rock formation. This material does not drain. Instead, water runs off bare exposed areas of it. Let’s face it, we don’t live in the lush farmland of Gilbert or the citrus (disappearing) groves of Mesa. We live at a higher altitude than the rest of Mesa and with that view comes a price to the condition of our soil. Our yards have had years of irrigation on them and that has built up the salt in our soils. Since the underlying caliche does not allow those salts to drain through, there is really no way to flush the salts other than massive amounts or fresh rain water (with no salts). Because our topsoil is shallow (notice roots along the surface of some turf), it tends to get very compacted not allowing Bermuda to spread itself through its rhizomes. Add to that tree shade and competition, Bermuda grass is bound to struggle. And while our turf lawns struggle, most other natural desert plants (shrubs, succulents, cacti) manage to survive in our hard deadpan soil.

AGING
The Villages were developed in the mid 1990’s. That’s 25 years. Our trees are aging and its showing through exposed roots and damage during the monsoon season. Palo Verdes, Mesquites and even saguaros are the most susceptible to wind and rain damage during storm season. The soil has also built up a high level of salts from 25 years of Salt River irrigation adding to the compactness. Years of chemical fertilizers has also killed off most of the natural organic microbes and matter in the soil adding to the struggle of our summer turf.

THE FIX
A few summers ago as I heard the complaints resurface, I started to educate my fellow Villagers about our landscaping conditions. As a board member, I also proposed a solution – xeriscape conversions. In August, 2017, we held a special meeting where we discussed our aging landscaping, our increasing irrigation expenses and a plan to fix our yards.

That fall, the board of directors voted to approve a plan of xeriscape conversions for the Villages. The landscape company, management company and members of the board visually assessed all homes in the Villages. A higher priority was placed on properties where there was tree root damage, struggling turf and erosion damage. A list of properties was created and a letter was sent to those homeowners acknowledging their yards and offering a xeriscape conversion.

Xeriscape conversions consist of possible tree removal (if causing root damage), turf removal, brick border removal/relocation, capping sprinklers, trenching and running irrigation drip lines, planting desert-hardy plants and applying new granite rock. To cover the cost, the board built into its annual budget a specific number of these conversions to take place. By converting some yards to xeriscape, the board believed that reduced irrigation costs could be shifted to the conversions thus saving the community money in the long run.

In early 2018 letters were sent out to the list of homeowners offering the conversion. Very few responded to the offer.

Ten conversions were approved for 2019. (The number of conversions budgeted for 2018 that did not occur, was rolled over into the 2019 budget.) Xeriscapes conversions began to take place in February with the removal of turf (transition period) as we emerged from winter. By May, all conversions were complete. The response of homeowners was very positive.

This fall, I expect the board of directors to continue the program budgeting more xeriscape conversions into the 2020 budget. Already, the Villages has seen a reduction in irrigation costs for 2019. My hope is to carry these savings over into more conversions in the future.

WHAT’S NEXT?
Will all Villages homeowners want to convert their lawns to xeriscape? No, many of our residents love the lush non-desert appearance of green lawns and big trees. That’s their choice and it’s their property. I do believe that our subdivision in Red Mountain Ranch will save money due to lower irrigation costs but will still keep the feel of a greener vibrant area of the community.

OTHER OPTIONS
I fully expect the complaints over landscape to continue even with the xeriscape conversion plan option. Some folks still love their lush green lawns, manicured shrubs and pruned trees. That’s their choice but there is a cost and you get what you pay for.

An option would be to end the contract and services with the HOA-approved landscaping company. Every homeowner in the Villages would be on their own as far as front yard landscaping. This could include contracting with an irrigation company to continue watering our lawns and shrubs. Or, the board of directors could turn off all irrigation to homes in the Villages and require homeowners to pay someone to cap and reroute irrigation lines to their own properties off their individual water supply lines. (All front yard irrigations lines are connected to water supply lines.) This would dramatically cut down the monthly fee paid to the HOA but would toss the responsibility of landscaping and water into the hands of homeowners in the Villages.

Homeowners taking on the responsibility of their own landscaping also means the HOA and management company would have to step up enforcement and compliance roles (as it does in other area of Red Mountain Ranch). Villages homeowners who don’t keep their yards well kept would see more letters and fines.

The difficulty in pursuing this option is that it requires approval by 75% of the 252 lot owners to amend the CC&Rs for the change to take place. That’s 189 homeowners minimum to amend the governing documents. In the 18 years I’ve lived in Red Mountain Ranch, I have never seen a simple quorum of homeowners turn out for any meeting or any election.

Add to that response rate, survey results. A few years ago, the board of directors sent out a survey to Villages homeowners asking about landscape services. The questionnaire asked if they would want to take on the cost and responsibility of maintaining their own yard or have the HOA continue providing the basic service. The majority of responses favored the HOA maintaining landscaping responsibilities. Given that many of our residents leave Mesa during the warmer months, it’s easy to understand why they would want the HOA to keep providing landscaping.

Homeowners in the Villages should realize the reality of the situation. We are an aging community built in a challenging geographical area locked into a fairly strict governing system. HOA-provided landscaping services should be understood as very basic and supplement services. Homeowners pay $42.46/month or $5.31/visit to the current landscaping vendor. That’s very cheap for a weekly mow and blow and I doubt anyone will find a landscaper who will deliver that type of service at that type of price.

My advice is to take more responsibility of your own yard. Don’t count on the HOA and landscaper to do it ALL for you. Water your own lawn. Pull your own weeds. Trim your own shrubs, prune your own trees and pick up your own trash and leaves. Heck, start your own compost pile in your backyard! (Don’t make major modifications without approval.) Remember, it’s your yard. You own it.